Sites with reservable shelters are indicated below. Shelters may be reserved over the phone with a VISA, MasterCard, or Discover.

Any individual or organization offering a registration or fee based activity or program must have department approval prior to using City of Hillsboro parks or facilities. 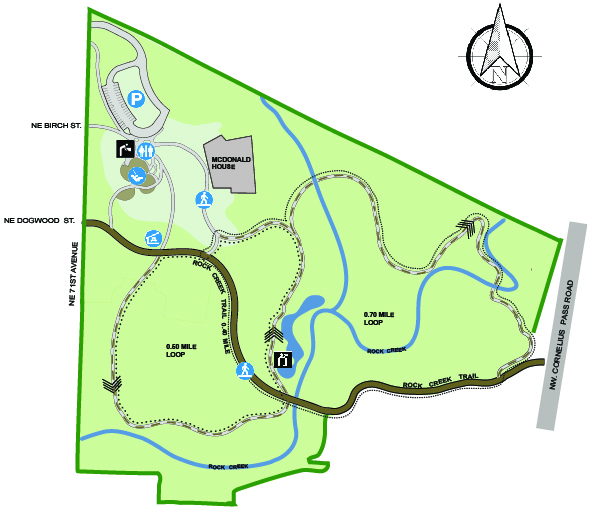 Orenco Woods Nature Park is a partnership between the City of Hillsboro and Metro in preserving one of the largest remaining open spaces along the Rock Creek Greenway corridor. The 42-acre park features a scenic blend of rolling landscape, open meadows, riparian habitat and forested areas for a variety of birds and wildlife. A network of looped trails and bridges weave their way through the site providing visitors with a variety of experiences. A segment of the Rock Creek Trail runs through the park connecting to Orchard Park and to the Rock Creek Trailhead at Rock Creek Boulevard just north of Highway 26. Over a century ago, Orenco Woods was part of the Oregon Nursery Company (ORE-gon, N-ursery, CO-ompany), the largest nursery on the west coast and best known for Orenco apples.

Orenco Woods offers a nature themed playground that includes elements such as a stream channel with water pumps and sand areas, logs, a large net climber and swings. A covered picnic shelter is available for rental.

Bicycles and on-leash dogs are allowed on the paved trails, but not on the habitat trails (wood chip and gravel). Dogs can damage sensitive habitats and threaten the plants and wildlife we're trying to protect. Birds and other animals think of dogs (even the friendliest ones) as predators. Animals have keen senses of sight, smell and hearing and a dog, even on a leash will disrupt their normal behaviors. Also, people see more wildlife in natural areas where dogs are not allowed.

The historic McDonald House is located within Orenco Woods Nature Park. Malcolm McDonald, co-founder of the Oregon Nursery Company, built his house on the property in 1910. The jewel of Orenco, the company town that supported the nursery, the house has long been used as a community gathering place. It is listed on the National Register of Historic Places. There is no timeline set for restoration. 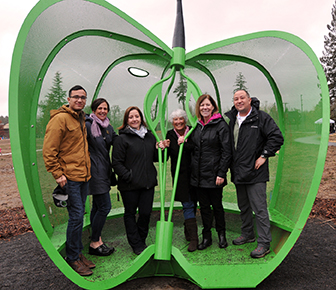 Learn more about the Seeds of Orenco Apple Sculpture. 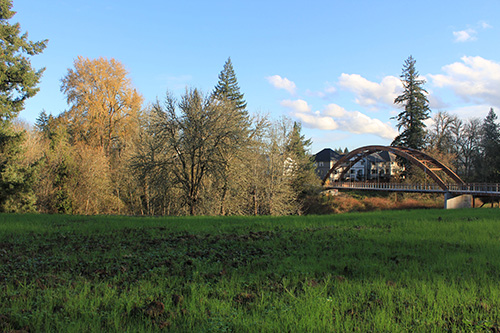