Welcome to our Newsroom! Here you will find Hillsboro's latest news and announcements.

It was a night of honors, promotions and gratitude for their service to Hillsboro Police. 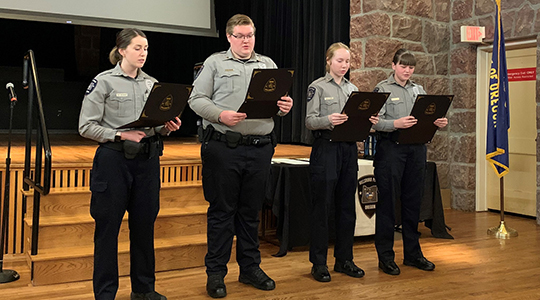 The ceremony serves as a way to thank the cadets who have completed their time in the program, as well as recognize those who have gone above and beyond to help make the cadet program a success.

This year, Joel Kaufmann was recognized for completing nearly six years of service within the program. Beginning his cadet career in February of 2014, Kaufmann participated in various community events, went on ride alongs, and competed every year in the annual Law Enforcement Challenge at Camp Rilea. Currently attending Portland State University, Kaufmann is seeking a degree in graphic design and hopes to work at a firm, as well as complete freelance projects to build up his professional portfolio following graduation.

Many of the cadets received awards for firearms proficiency and marksmanship, volunteer hours, and individual achievements. The most received award was the Meritorious Unit Award which was given to the members of the post who helped locate and rescue an elderly woman this past summer at Camp Rilea.