Show/Hide
Public Alert – All City facilities, playgrounds, sports courts, and recreation equipment are closed through April 28 in an effort to mitigate the spread of COVID-19 in our community.
Get the latest coronavirus updates, cancellations, and information on our COVID-19 webpage. Para actualizaciones sobre el coronavirus en español, visite a nuestra página de noticias.

Welcome to our Newsroom! Here you will find Hillsboro's latest news and announcements.

Chief Coleman joined the City of Hillsboro Police Department as Deputy Chief in June 2015 and was named Interim Police Chief in October 2019. 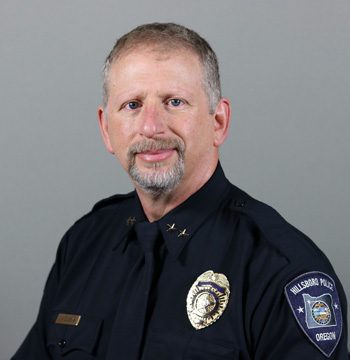 Chief Coleman joined the City of Hillsboro Police Department as Deputy Chief in June 2015, where he oversaw daily operations for the department. He was elevated to Interim Chief in October 2019 following the retirement of former Police Chief Lee Dobrowolski.

“Over the past few months, I have had the opportunity to work closely with Interim Police Chief Jim Coleman as he led our Police Department,” Hammond wrote in an email to City of Hillsboro employees. “Chief Coleman has done an outstanding job serving our community and I have appreciated his communication style, humility, and strong advocacy for the department.

“He has demonstrated a strong desire to find ways to better connect with our community as we continue to grow and become even more diverse,” Hammond continued. “I have also heard from a multitude of past and present Police Department employees, department directors, and community members about Chief Coleman’s leadership skills and collaborative nature. After all of this feedback and my own experience working with him, I am very happy to announce that Interim Police Chief Jim Coleman has been appointed as the new Hillsboro Police Chief.”

Chief Coleman’s 29 years of law enforcement experience began with the Salt Lake City Police Department in 1990, where he later rose to the rank of Deputy Chief. During his tenure in Salt Lake City, Chief Coleman commanded the patrol division, internal affairs, and the police academy. He also served as the International Broadcast Center venue commander during the 2002 Winter Olympics.

“I first became acquainted with Hillsboro and the Hillsboro Police Department five years ago, when I was invited to facilitate a leadership development program,” Chief Coleman remembered. “Although I was not considering leaving the Salt Lake City Police Department at the time, the atmosphere and energy of the community and the department attracted me and motivated me to take on the role of Deputy Chief.

“Together with my wife, a teacher in the Hillsboro School District, and my daughter, a graduate of Liberty High School, along with the support of my adult son, we have come to appreciate our good fortune in being a part of the Hillsboro community. We could not be more excited about being a continuing part of what we have come to know as home.”

Chief Coleman holds a bachelor’s degree in sociology from the University of Utah and a master’s degree in criminal justice from Arizona State University. His professional experience includes serving as an instructor on police leadership, an area of study he is particularly passionate about.

“I’ve come to understand the tremendous value the Police Department and its members place on attracting a diverse set of abilities and background to build an adaptable and cohesive team,” Chief Coleman explained.

“I’m motivated to keep leadership on pace with the internal drive already present. Meaningful progress is ready to be made in areas such as building trusting relationships with all communities, data-driven safety and crime solutions, emergency and natural disaster response capabilities, and a thoughtful approach to long-term challenges, such as homelessness.

“It is both an honor and a unique responsibility to build on the past, while capturing the same forward momentum the entire City of Hillsboro is experiencing as it continues to grow and evolve.”