Update: The road openings and closures in the South Hillsboro neighborhood are now in effect.

Hillsboro-area drivers will see street changes in the South Hillsboro neighborhood starting this week. As home construction continues, the City of Hillsboro and Washington County are adjusting local roads and intersections to relieve congestion, reduce commute times, and improve safety.

Beginning on Thursday, July 12, at 6 am, Cornelius Pass Road will be extended south of TV Highway to Blanton Street, which will connect 67th Avenue (formerly 229th Avenue) and 209th Avenue. The newly expanded roads will include the installation of traffic signals at three intersections.

The expanded Cornelius Pass Road — with a level railroad crossing — will provide a north-south alternative to 209th Avenue. Cornelius Pass Road will be in better position to handle increased traffic compared to 67th Avenue, where the railroad tracks forced drivers to slow to a near stop when crossing.

Blanton Street’s expansion will create a new east-west option separate from TV Highway for safer and easier walking and cycling.

The City has held three South Hillsboro community open houses in the past 14 months to alert residents to the traffic changes, as well as continued outreach in the City Views newsletter, Happening in Hillsboro email updates, social media, and the City of Hillsboro website at www.Hillsboro-Oregon.gov

The South Hillsboro neighborhood will include bicycle infrastructure to improve safety and encourage commuting by bike, as well as a 15-mile network of trails and walkable districts. 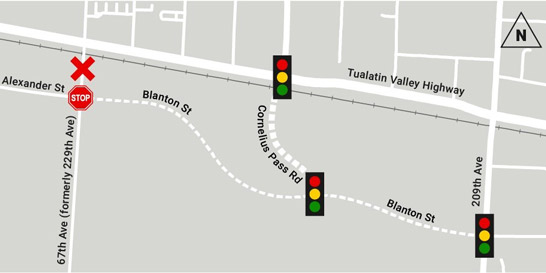