Where do you celebrate 50 new American citizens from 28 countries? At the library that’s “For Everyone.” 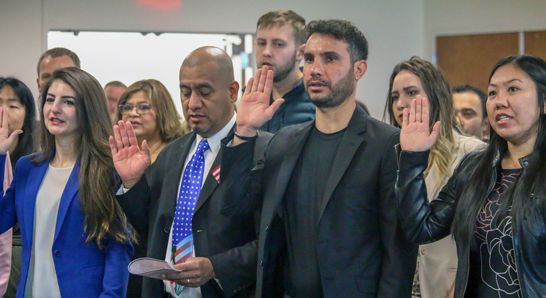 Where do you celebrate 50 new American citizens from 28 countries?

At the library that’s “For Everyone.”

“You have all worked so hard to get here,” Mayor Callaway told the group. “You each have a unique story. You each are on a unique journey. One thing you all have in common is your perseverance, your determination, and your resilience.”

Before taking their oath, the new citizens and their families arrived at Brookwood Library, where the word “Welcome” is translated into 11 different languages and colorfully displayed across the library’s front entrance — and the Hillsboro Public Library’s mission is “For Everyone.”

Highlighting the value of becoming an American Citizen

Mayor Callaway noted that among the student members of Hillsboro’s Youth Advisory Council (YAC), 17 of 25 members have either a parent or a direct relative who is a naturalized citizen. 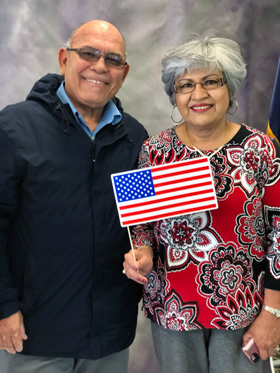 He then offered each new citizen a voter registration form while describing the act of voting as the best way to impact positive change in each of their communities.

“One thing you and I now I have in common is we’re citizens of the greatest country on Earth,” Mayor Callaway said. “Another is that we are equals. You are equal to me and all other citizens. The richest person, the most powerful person, the smartest person, they each get one vote. Just like you and me. So make your voice heard make sure you vote. It’s your privilege and it’s our responsibility.”

The ceremony marked the second opportunity for Hillsboro Public Library employees to welcome new Americans after previously hosting in 2016. Throughout the year, the Library demonstrates its commitment to inclusivity for all community members by offering storytime programs in eight languages.

“Hosting the naturalization ceremony for a second time is a tremendous honor for the City of Hillsboro, and we are excited to be hosting during National Library Week,” said Library Manager Linda Osuna.

“The public library is part of the fabric of American culture, with the first free and public library established in the United States in the early 1700s. Hillsboro Public Library staff pride ourselves in not only providing a trusted resource for information, but also a welcoming space for everyone in the community.”

The 28 countries represented span six continents, leaving out only Antarctica: 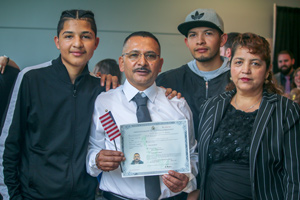