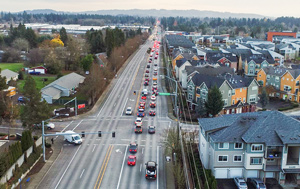 Did you know…the average commuter in the Portland metro area spent 52 hours stuck in traffic in 2014?

That’s more than two days of your life.

Since 1982, the amount of time you and other drivers spend in traffic has more than doubled. But what to do about it?

One conclusion: Hillsboro drivers are feeling the strain getting to and from work.

Almost half of the comments focused on driving, with 16 percent talking about how traffic congestion is increasing. Commenters said they would like many of the City’s major roads and intersections — including Cornell Road, Brookwood Parkway, Century Boulevard, and TV Highway — to see more love.

Where improvements are needed most

City of Hillsboro planners learned another key lesson during the first phase of TSP outreach. Groups such as youth, seniors, low-income families, people with disabilities, people of color, and people with limited English proficiency are more likely to experience transportation issues as they get around town. One example: TV Highway, Hillsboro’s highest-crash corridor, runs next to where most of the City's transportation-disadvantaged residents live.

Planned connections — such as the extension of Century Boulevard across East Main Street and Highway 26, and of NE Veterans Drive to NE Belknap Court — will create alternatives to existing congested roads. Some roads will be widened to increase continuity and capacity, while others will gain a center-turn lane to help reduce crashes.

To learn more and share your thoughts about the driving improvements proposed in the TSP update, visit Hillsboro-Oregon.gov/TSP.