Curbside Food Composting Will Begin in 2020

Every-other-week service to be combined with yard debris

Food scraps from Hillsboro will be composted with yard debris in North Plains. 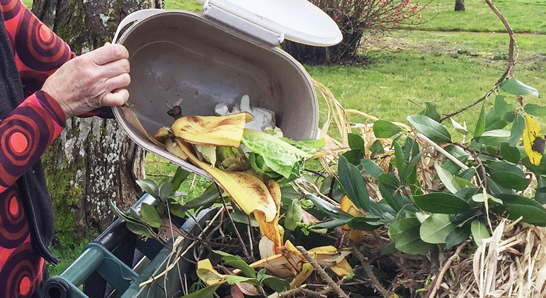 Note: This story has been updated to reflect the Hillsboro City Council approved the creation of a residential food scraps program at its meeting on Tuesday, June 18, 2019.


When the bananas go bad, or when the bread gets moldy: Most people throw their food scraps in the trash, where they end up in a landfill.

Beginning in 2020, Hillsboro residents will have another option: Curbside food composting.

Many Hillsboro businesses and schools compost food already. Following the City Council’s approval on June 18, 2019, Hillsboro residents will be able to combine food scraps and yard debris into one curbside bin — at home, every other week.

When food decomposes in a landfill, it produces harmful greenhouse gases, including methane — one of the worst contributors to climate change. Properly composted food scraps become a useful and nutrient-rich material that helps the soil in gardens, earning the nickname “Black Gold” from gardeners.

For Hillsboro residents, yard debris mixed with food scraps will be composted in North Plains at Nature’s Needs. In doing so, Hillsboro joins neighbors with food composting programs in Beaverton, Forest Grove, and Portland.

The food composting program will increase rates by 1.9 percent, or 49 cents per month for most customers based on a 35-gallon roll cart, beginning on August 1, 2019. Food composting service will begin in 2020, but the program requires up-front funding to make capital investments in equipment needed for service delivery, including the distribution of a kitchen counter-top container for food scraps to residences.

During a work session in early June, the Council declined to pursue a second option that would have offered food composting every week. That more frequent service proposal would have raised garbage and recycling rates by $4.45 per month for most customers.

Hillsboro currently has the fifth-lowest rates for garbage and recycling services, among 14 cities and counties in the metro area.

Learn more about the City's garbage and recycling program, including tips to reduce your solid waste.