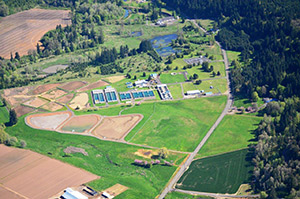 The Joint Water Commission (JWC) Water Treatment Plant (WTP) is the primary drinking water supplier in Washington County, Oregon, and is responsible for treating, transmitting, and storing potable water for more than 365,000 customers.

The JWC Water Treatment Plant is the largest conventional treatment plant in Oregon. The Tualatin River intake is located on a channel just off the Tualatin River and is shared with the Tualatin River Irrigation District. The JWC WTP was built in 1976 by Hillsboro and Forest Grove. The original plant could treat up to 21.3 million gallons per day (MGD). It has been expanded through the years to accommodate the addition of Beaverton and TVWD, as well as population growth. The Plant is now capable of treating up to 75 MGD. The JWC WTP is currently undergoing a project to increase seismic resiliency and the capacity of the WTP from 75 MGD to 85 MGD.

Learn more about how the JWC treats, transmits, and stores your drinking water. 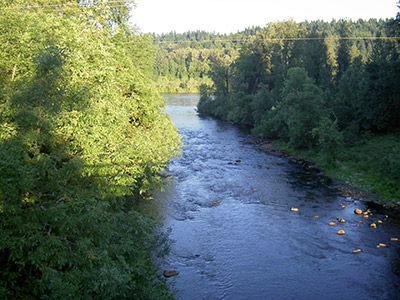 The City of Hillsboro and TVWD are partnering to develop the mid-Willamette River at Wilsonville as an additional regional water supply source by 2026. The entire system is being designed to withstand the impacts of a large earthquake or other natural disasters so that water service can be restored quickly after an event.

The Willamette Water Supply Program (WWSP) includes building a modified intake on the mid-Willamette River at Wilsonville, a water treatment plant, storage tanks, and more than 30 miles of large-diameter transmission pipeline traveling north from Wilsonville, through Beaverton, and into Hillsboro.

Pipeline construction for the WWSP began in November 2016, as the first pieces of pipe were placed into the ground along Kinsman Road in Wilsonville. Kennedy Jenks engineers were selected as the design consultant for the South Hillsboro area pipeline route. Construction on this portion of the pipeline has begun along the extension of Cornelius Pass Road through Reed’s Crossing. Staff has utilized wetland delineations and gathered other information in order to develop permit applications. Permit applications were submitted in April 2017 to Federal and State agencies. Authorizations will include any environmental mitigation measures needed to ensure that the new water system complies with federal and state laws.

US Army Corps of Engineers Requesting Public Comment on the WWSP Joint Permit Application by November 13, 2017
In April 2017, the Tualatin Valley Water District and City of Hillsboro submitted their Joint Permit Application to the US Army Corps of Engineers (USACE) and Oregon Division of State Lands. The application contains information about the Willamette Water Supply System's intake modifications in the Willamette River, the new water treatment plant and reservoirs, and more than 30 miles of new pipeline. The coordinated federal and state process covers reviews for wetland impacts, endangered species, cultural resources, and other natural resource impacts.

In April 2017, the Oregon Division of State Lands first accepted public comment on the joint application, which closed June 8, 2017.

The USACE has a different and separate permitting process and timeline, so the Corps is now accepting public comment on the application until November 13, 2017. Visit the USACE's website  to access the application and provide feedback by e-mail, mail, or fax.