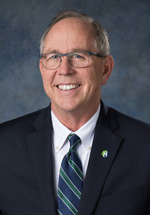 On January 3, 2017, Steve Callaway became the 50th Mayor of Hillsboro. Mayor Steve Callaway was elected to the City Council in November 2010, re-elected in 2014, and most recently elected as Mayor in 2016. He appreciates Hillsboro as being a great place to have raised his family, and he wants to make it a great place for the next generation of families. Steve ran for City Council because he wanted to continue his involvement in and service to Hillsboro in a position that would allow him to blend his experience gained while serving on the Budget Committee, the Hillsboro 2020 Vision Implementation Committee, the Planning Commission, and more.

Steve has lived in Hillsboro since 1995. He feels it is important to live, shop and volunteer in the community where he is earning his living. Additional community involvement includes the Jackson Bottom Wetlands Preserve Board, the Library Foundation, Oregon International Airshow, Boys and Girls Club, Tualatin Plains Presbyterian Church, the 53rd Avenue Park Task Force and the Hillsboro Schools Foundation.

He graduated from Oroville High School in California, and obtained his undergraduate degree from Point Loma Nazarene University in San Diego. Steve obtained his master's degree at Lewis and Clark College in Portland and has retired from his position as a principal at Tobias Elementary School. He and his wife Joan have two children.

Send an email to the full City Council through our online form.